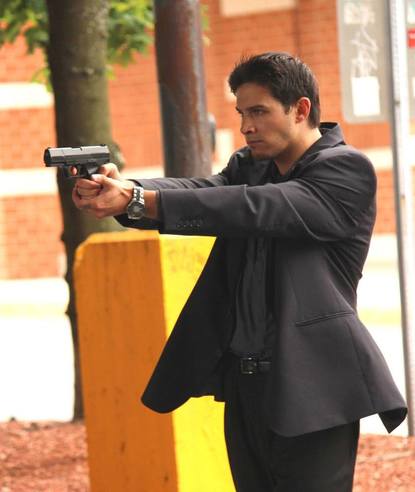 "My first time on a professional movie set was on my birthday on March 19, 2013.  I considered it a birthday gift to myself to see what it was like to be a part of a creative team again, an experience I had not felt since the old days playing in bands.  The movie set was actually for the filming of the TV Series "Hatfields & McCoys" (Kevin Costner/Bill Paxton) being aired on the History Channel.  This I believe was their pilot episode for Season II (In hindsight the second season wasn't picked up by the networks unfortunately).  I was only an extra for the day, but it gave me the opportunity to see how a professional film set was run and the amount of people involved in the creative process.  I loved observing the lighting technicians running up and down the ladders, the cinematographers choosing their angles, the production assistants moving people around, and the talent just waiting for their chance to shine.  The chemistry on set was amazing and I knew after that day I was meant to be a part of the film making process, now I just needed to begin taking the right action.

My first acting class was a weekend intensive workshop I had through "Straeon Filmworks" in Boston, MA at Massachusetts College of Art and Design on March 23-24, 2013.  My acting coach was Jock MacDonald who had been a professional actor, writer, and director in film and theater for over 35 years.  The scene I had to perform with my scene partner was a quick scene from the first "IRONMAN" movie.  I liked the scene because I felt Tony Stark's character was something I was familiar with (minus being a genius billionaire superhero of course) and I felt comfortable having this be my first character ever.  Leading up to the intensive workshop, we were instructed to meet up with our scene partner 3 times to rehearse the scene and get familiar with our lines.  The whole creative process was an amazing experience and I felt adequately prepared for the workshop.  The energy in the room was phenomenal that weekend and I enjoyed watching my classmates present their work.  By the end of the weekend I truly had had a transformational experience and I knew without a shadow of a doubt that acting was something I needed to do for the rest of my life.

Since that weekend, I've been continuing my training and actively pursuing a professional acting career while simultaneously pursuing my professional painting career.  Over the past few years I've been cast in a variety of short films, commercials, industrial films, and web series.  During this time I have also discovered the art of voice over and I equally enjoy manipulating my voice to create energetic and versatile characters.  I am proud of every role I've played, both large and small, as all of these characters have transformed me in some way.  I am infatuated with stories and every day I yearn to express the human heart.  Each day presents a new opportunity and I hope you'll join me on my journey to become the best story teller I can possibly be.